The Strokestown Estate, controlled over 11,000 acres across north-east Roscommon in the 18th century. But the Great Famine rocked its finances. Its tyrannical landlord, Denis Mahon piled pressure on tenants who were struggling to survive in the already febrile atmosphere the Irish famine (1845 – 1847) had created. When Mahon became the first Irish landlord […]

The Strokestown Famine Archive Strokestown’s unique collection of famine-era documents came to light when the new owner, Jim Callery, was sifting through the contents of the great house. While he was surprised to discover 50,000 original famine-era documents and artefacts lying unexamined among the family’s papers, he immediately recognised the importance of conserving them and […]

The Palladian style of architecture you see at Strokestown owes a huge amount to classical Roman styles and to one Venetian architect! Andrea Palladio (1508-1580) evoked Roman traditions in a series of churches he designed in the 16th century, and his ideas caught on throughout Europe. Palladio’s passion for classical symmetry and strict proportions looks […] 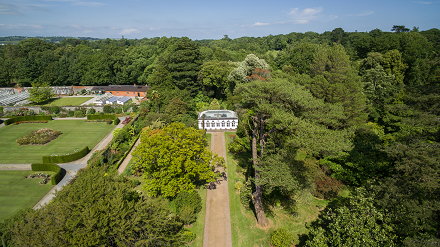 Did you know that pineapples, lemons, and plants from far-off places once flourished in Roscommon at Strokestown Park? Henry Pakenham (1787-1863), the aristocratic owner of Strokestown Park House, was an avid gardener, and he travelled far and wide to find unusual and rare plants and seeds. Many rare plants were brought to Strokestown from across […]

The Irish Heritage Trust is excited to present a specially curated exhibition at Strokestown Park and National Famine Museum as part of Ireland’s Decade of Centenaries. Curated by Dr. Darragh Gannon (University College, Dublin), ‘Soldiers and Civilians: Strokestown Park and the Irish Revolution’ explores a decade of unprecedented political change and military conflict on the […]

[draft] Strokestown House with its adjoining estate and the town built to service it, were just the most visible lands owned by the Mahon, and later Pakenham-Mahon family. Captain Nicholas Mahon acquired land steadily from the late 17th-century onwards, and, by the early 18th century, the estate covered over 11,000 acres across north-east Roscommon. When […]

[draft] Like many of Ireland’s great houses, Strokestown House was remodelled over time. The centre block was completed in 1696. The house was then extended, in around 1730, by the famous architect Richard Cassels. He added the wings that made it one of Ireland’s finest Palladian mansions. One of the most striking features of Strokestown […]

[very very DRAFT ideas in no particular order] We are moved by the story of the 1,490 emigrants who left … . We remember them in Strokestown and celebrate their legacy in the places they made home. But what happens when we view their story with a modern lens? What does their story tell us […]